After being diagnosed with leukaemia aged 22, Alfie had to undergo a number of life-saving treatments for him to survive. However, advanced technology used by his local laboratory services meant his condition could be monitored very closely and, eventually, stablised. Dr Ben Uttenthal, his haematologist, tells Alfie's remarkable story.

In October 2015, Alfie was 22. He hadn’t felt well for a few weeks, but things got suddenly worse and he went to A&E with abdominal pain and vomiting. A routine blood test showed that Alfie had some abnormal cells in his blood. When a pathologist examined these under the microscope it was clear these were primitive blast cells: he had acute myeloid leukaemia. 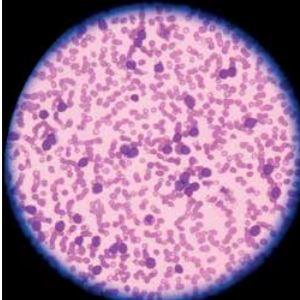 Alfie was transferred to the Teenage Cancer Trust Unit at Addenbrooke’s Hospital in Cambridge, where doctors took a bone marrow sample. Detailed pathological analysis of the specimens by microscopy and flow cytometry showed that most of his marrow had been replaced by these abnormal cells.

Most importantly, testing of the leukaemia cells found a particular DNA mutation in the NPM1 gene. This meant doctors could use a highly sensitive molecular monitoring technique – known as minimal residual disease (MRD) – that can detect tiny numbers of leukaemia cells (as few as 1 in 100,000 cells).

After undergoing several cycles of intensive chemotherapy, Alfie was delighted to find himself in remission, with no leukaemia cells visible when examined under the microscope by a pathologist. He made a good recovery from chemotherapy; however, MRD testing showed that the leukaemia cells had not been completely eliminated.

Results showed that for the first time since he had been diagnosed in 2015, Alfie tested completely negative. Since then he has had several further bone marrow tests, with molecular pathologists able to confirm each time that leukaemia is no longer detectable.

Alfie’s doctors began to plan a stem cell transplant. Because Alfie’s tissue type was unusual, it was harder to find a match for donation, but his parents were each half matched to him and could safely donate stem cells. Alfie’s leukaemia returned in December 2016. He had more chemotherapy, which again reduced, but didn’t eliminate, the leukaemia. This time, Alfie went on to have a stem cell transplant from his father, Ashley. Once more he was in remission.

However, teams at the laboratories working on his case – the Haemato-Oncology Diagnostic Service in Cambridge and the Molecular Oncology Diagnostics Unit at Guy’s Hospital in London – were concerned: there had been a rise in the levels of the NPM1 gene mutation in Alfie’s marrow, suggesting that a relapse was imminent. Alfie’s father donated more cells, this time lymphocytes – the immune cells that help to fight infections and cancer. In September 2017, nearly five months after his transplant, Alfie underwent a donor lymphocyte infusion.

This was a difficult period in Alfie’s treatment – the lymphocytes had the potential to cause a life-threatening immune complication, graft-versus-host disease. But two months later, MRD results showed that for the first time since he had been diagnosed in 2015, he had tested completely negative. Since then Alfie has had several further bone marrow tests, with molecular pathologists able to confirm each time that leukaemia is no longer detectable even by the most sensitive MRD techniques.

Alfie is now back at work, living with his partner Danielle and enjoying weight training at the gym several times a week.

On one hand, the treatment has affected my energy levels when completing tasks and has changed my work–life balance. Before, I worked five days a week in an office environment. I now work two days a week, mid-week, so I can rebuild my energy levels for the next week. However, on the other hand, it has given me a chance to focus on my health. I’ve been going to the gym and have changed my diet with support from a dietician. This is helping me improve my stamina so I can become more involved with everyday life. It has also given me the chance to play golf again and socialise with my girlfriend, friends and family.

The treatment and support the hospital has given me has helped me move on with my life – it has made my life a more enjoyable experience.

Dr Henny Martineau: Trying to save the Saiga

This case study is taken from our latest Annual Report. Download a copy.