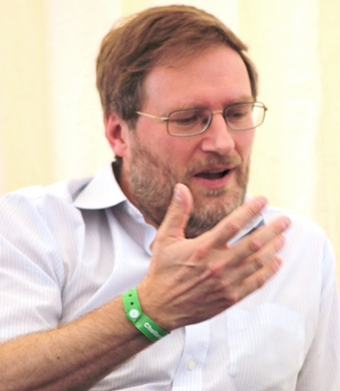 Although the study of genetics is becoming an increasing part of all areas of pathology, some doctors and scientists specialise in this field specifically. Dr Ian Frayling has been a Consultant in Genetic Pathology since 2003 and is based at the All-Wales Medical Genetics Service. He talks us through his journey from chemical pathology to examining mutations in DNA, and highlights his research into Lynch syndrome.

The study of genes, the elements of inheritance which determine our characteristics, including how we interact with the environment. Medical genetics encompasses both clinical genetics and laboratory genetics. My specialist interest is in cancer genetics, in particular bowel and related cancers, including a condition called Lynch syndrome.

Talk us through a typical day for you...

My day begins on the drive into work when I start thinking about what needs doing and what I need to do when I get in. Checking my emails, I look for anyone who is asking for advice about a genetic test, or about a mutation that has been found in a gene and what it means, or whether after much testing nothing has been found and if there is anything else that can be done. Anyone who is seeing a patient in clinic that day or the next naturally gets priority. Every enquiry is different, from something easy for me to answer, to a considerable amount of work, possibly including phoning some friends and asking them to do a bespoke analysis. About a half of such requests come from colleagues in Wales, one third from elsewhere in the UK and the rest from overseas. Most correspondence is by email, but I get the occasional letter or laboratory report in the post, always welcome. One of the great aspects of what I do is that I work with a wide variety of colleagues around the world in many different specialties, so I might ask them if they have seen a similar mutation, or physical characteristic in a patient or a tumour.

Afternoons, or mornings, may mean teaching under- and post-graduates, as well as being a College examiner – which is a great way of keeping up to speed. I provide input to professional guidelines and textbooks, and I have been fortunate to teach in the most northerly medical school in the world, in Tromsø, as well as give an impromptu talk in the Falkland Islands while seeing cancer families there – I wish they had warned me so I could have packed some slides! Earlier this year I gave a named lecture at the biennial meeting of the International Society for Gastrointestinal Hereditary Tumours (InSiGHT) in Sao Paulo. This was on the health economics of finding Lynch syndrome by systematic testing of incident cancers rather than chasing family histories, and I then went on to work on a research grant on the same subject in Australia.  This extends the work we have done in the UK, itself already enshrined in the Royal College of Pathologists (RCPath) minimum dataset for colorectal cancer.

Why did you choose this specialty?

I was training in chemical pathology in the 1980s and went to a talk on genetics where the point was made that there would be a need for those skilled in laboratory genetics. I’d done some DNA work as part of my honours degree in biochemistry, and encouraged by my wife to study for a PhD, looked around for an opportunity. This came in the form of a fellowship to work on DNA repair in a cancer institute – working on the repair of the substance I was interested in, which was intriguing. At the end of my PhD, the institute director asked if I’d thought of getting into “this new-fangled cancer genetics?” So I spent a year in a regional genetics laboratory finding mutations in patients with familial adenomatous polyposis. I then moved to a clinical fellowship at the Imperial Cancer Research Fund Bowel Cancer Unit, just before Lynch syndrome was found to be due to inherited mutations in DNA repair genes.  Later on as a Specialist Registrar (SpR) I met Mark Arends in Cambridge, who also worked on bowel cancer genes, and we set up tumour testing for microsatellite instability and DNA mismatch repair, including the NEQAS ICC scheme. So, genetics and hereditary bowel cancer sort of found me, and I have no regrets.

What do you enjoy most about your job and your chosen specialty?

One of the great things about genetics is that in so-called routine practice the unusual and not-seen-before are commonplace, and make you really think about how human biology works, how we analyse it and how we might improve tests. Every day you appreciate that every mutation you see is another ‘tick’ of the evolutionary clock, in a person or a tumour, and what a profound fundamental principle Darwinian selection is. To know you have made a difference when someone says thank you is also really satisfying.

What advice would you give to students looking to enter your field?

The rate of change is enormous and likely to remain so. Genetics is becoming genomic medicine and all of medicine will have to get to grips with it. You will likely have to reinvent yourself more than once in a career. So, be flexible, open minded, and prepared to move.  Endeavour to find yourself a field you enjoy and become expert in. And if you really want to make a difference, look for underlying causes and don’t forget the importance of influencing policy, which is critical to making changes for the good, and avoiding changes for the worse.  The RCPath is an important part of that, and the College is its members.

A group of 40 of us, worldwide, embarked over 6 years ago on a systematic, probability-based system for the interpretation of mutations in Lynch syndrome, as we were all being asked about them and realised no single one of us had all the skills, but we all wanted a consistent and scientifically proven method to give the best and safest advice. After a couple of years of late night teleconferences we had a method we were happy with, and when a famous international journal got wind of what we were doing, they asked us to submit our manuscript to them first – unheard of! They did publish our work, but it still took nearly a year in review, so no favours. The publicity even made the centrefold of The Sun, so from an international journal with the highest impact factor to the UK journal with the lowest required reading age – some sort of triumph for the public engagement of science. Just after I’d moved to Cambridge as an SpR a suggestion I made helped with the discovery that the other gene that can cause adenomatous polyposis is the human homologue of the E. coli gene I’d studied for my PhD. I’d often wondered what form deficiency of it would look like in humans, a truly weird coincidence.

Apart from my job…

I was recently invited to be the Honorary Medical Advisor to Lynch Syndrome UK, which is a great honour. We are all exhorted in Wales to work to the principles of prudent healthcare, which includes co-production – working with patients, those you serve – and this brings it home while at the same time empowering one to get things done on their behalf.

Training to become a doctor? Take a look at career profiles for medically-qualified pathologists.