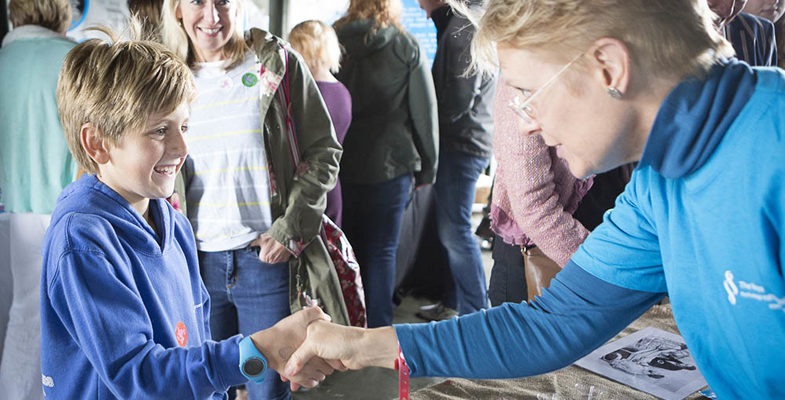 This year's Science Communication Prize is now open! Entries should be submitted to [email protected] by 23.59 GMT on Monday 17 July 2023.

What is the Science Communication Prize?

The Royal College of Pathologists Science Communication Prize is kindly sponsored by Sonic Healthcare UK. It is an award given to a pathology trainee, Foundation doctor or undergraduate who has shown excellence in their science communication activities throughout the year. The prizes aim to:

There will be two prizes, one for each of the following categories.

Each winner in the trainee and undergraduate category will receive £500 and be invited to accept their prize at the College's New Fellow's Ceremony, with the prize awarded by representatives of Sonic Healthcare UK. An interview with the winner will be posted on the College website.

The decision on the Science Communication Prize winner will be made by a selection committee composed of the Vice President for Communications, Director of Publishing and Engagement and a member of the Public Engagement department. Selection by the committee will be based on evidence of a sustained commitment to high quality public engagement activities – further information is in the guidance for applicants below.

About our sponsor: Sonic Healthcare UK

The Science Communication Prize's sponsor, Sonic Healthcare UK, are leaders in consultant-led diagnostics, innovation, value, and long-term investment in healthcare provision. They have over 30 years’ experience in the UK pathology market and have been working in partnership with the NHS for over 20 years.

Sonic Healthcare UK has been at the forefront of COVID-19 testing for the UK since the disease first emerged. The team has developed new testing methods, worked closely with hospitals, helped others open their own labs, and by the end of September 2020 was processing more than 10,000 PCR tests a day.

Sonic Healthcare UK, which incorporates the TDL Group of laboratories and services, is part of the Sonic Healthcare group, one of the world’s largest clinical diagnostics groups with a demonstrated track record of medical excellence. Find out more at www.sonichealthcare.co.uk.

Congratulations to this year’s winners: Victoria (Kip) Heath and Dr Vinaya Gunasri! Thanks to the generous sponsorship of this competition by Sonic Healthcare UK, both winners will be awarded £500 each.

Kip is a Deputy Trust Lead Healthcare Scientist at Great Ormond Street Hospital. During the course of the year, Kip has completed more than 100 hours of science communication. She was part of the #PathologyROAR project, where she worked with healthcare scientists from seven NHS Trusts and four professional bodies to create a series of 19 videos that raised the profile of pathology careers. These videos are now part of the Health Education England national work experience catalogue. Kip also showcased her science comedy skills at her first international comedy gig at BrightClub Ireland. She was also invited to speak at New Scientist Live in Manchester, where she highlighted pathology careers and the impact of microbiologists during a session on Antibiotic Resistance.

In addition, Kip has gained funding for science communication skills training for pathology apprentices and researchers respectively. She has promoted pathology careers to school students by giving careers talks and providing shadowing opportunities for sixth form students. Each year, she also provides mentoring and interview coaching to 15 or so graduates. You may recognize Kip from some of RCPath’s public engagement activities, namely our National Pathology Week undergraduate pub quiz which she co-hosted. 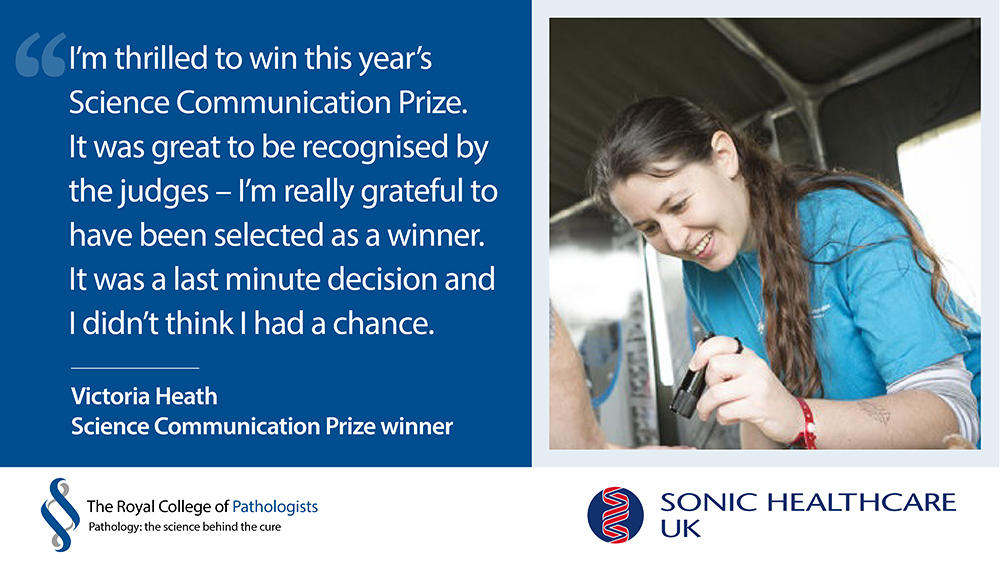 Vinaya is a histopathology registrar undertaking a PhD at Queen Mary University London. Vinaya’s passion for spreading pathology information to audiences of different ethnic background and languages was evident from her application. She wrote: ‘It is recognised in the literature that screening uptake in ethnic minorities in the UK is lower than the rest of the population, partly due to language barriers and embarrassment discussing sensitive procedures. This highlights the need for a translation project such as ours which targeted communities who may not speak English well and are hard to reach.’

Vinaya led a project involving the translation of voiceovers and subtitles for videos (created by Cancer Research UK) on bowel cancer and cervical screening into Sylheti Bengali and Urdu. The videos are now available to watch on YouTube. She worked hard to publicise the videos to relevant communities and charities, as well as the Royal College of Obstetricians and Gynaecologists and the Royal College of Physicians. On World Cancer Day, Vinaya also spoke on live radio to Voice of Islam. She also wrote an invited article for Cysters, a charity working with ethnic minorities to reach target groups within their campaigns. 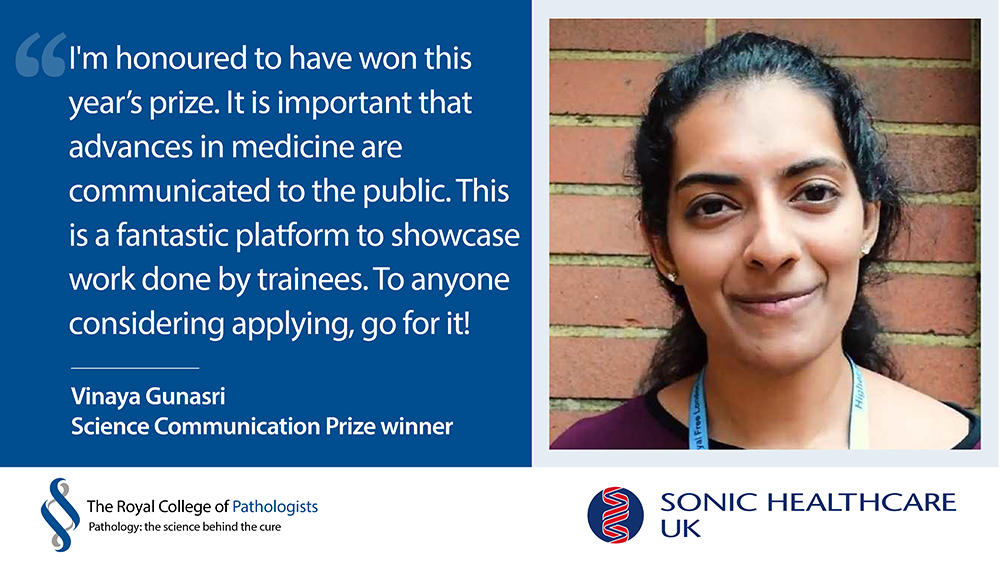 Use the application form below to self-nominate for this prize. There is a space on the form for a referee to provide a supporting statement for your application. Refer to the guidance for applicants document below before you complete the form. You can apply as a team rather than an individual but the maximum number of people that can be included in one prize application is four. Completed application forms should be returned by email to [email protected].

Past winners of the Science Communication Prize

Find out who won the previous years' awards and listen to them speak about their love for science communication.