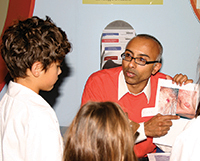 A variety of events were organised by Kamaljit Chatha (Senior Biochemist) and Jenna Waldron (Pre-registration Clinical Scientist), across three sites: Heartlands Hospital, Good Hope Hospital and Solihull Hospital, with the support of 15 team members to arrange displays, stands and present at the Grand Round.

Heartlands organised an exhibition with posters including neonatal jaundice and haemolytic disease of the newborn. Biochemistry staff demonstrated tests revealing high blood glucose levels and a dipstick test to show excessive protein in a counterfeit urine sample. Haematologists provided a microscope and some blood films showing conditions such as anaemia.

The Grand Round clinical meeting was arranged at both Heartlands and Good Hope, with lunch provided by Roche. The laboratory’s role in diagnosing myeloma was the theme of the discussions. The events across all sites were popular with both Trust staff and the general public. It was commented that the displays were very “attractive and inviting”.

Southampton school pupils get a taste for microscopy 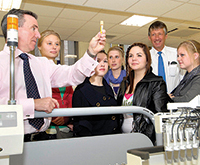 Dr Meg Ashton-Key, consultant histopathologist, invited secondary school pupils for a pathology afternoon at Southampton University Hospitals NHS Trust. Trainees, Emily Shaw and Charlie Tilley, talked about what pathology is and described its different branches. This was followed by an insight into biomedical imaging with the impressive range of microscopes available and what they can do – the 3D confocal microscopy images were a great hit.

The session concluded with case presentations on sudden cardiac death by ST2s Brett Lockyer and Laura Nichols. The investigation of a body found in water proved very popular. Dr John Wood, Biomedical Scientist, then gave the pupils an insight into a working laboratory with guided tours of the automated pathology laboratory. “I loved it”, “3D was pretty cool” and “I want to be a pathologist”. 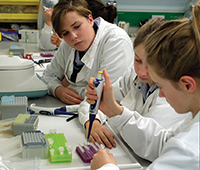 Year 10 students were invited from West Bridgford School and Nottingham Girls High School to spend a day in the pathology department of the Nottingham University Hospitals NHS Trust. The day started in the microbiology department with an “Infection Detection!” workshop which investigated a ward outbreak of diarrhoea caused by Clostridium difficile. We produced two short films explaining the role of pathologists: “Pathology” and “The Screen Team: The role of pathology in preventative medicine”. In the afternoon we held a discussion on human papilloma virus and cervical cancer, followed by a practical session. Overall, the feedback was positive and the students thoroughly enjoyed the day. 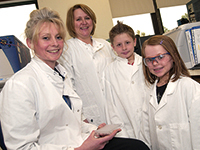 This was an opportunity for young patients with PKU who had been diagnosed as part of the Neonatal Screening Programme and were still in the care of the clinicians within the South West Region, to see ‘What happens to my bloodspots?’. These patients, who were between 8 and 12 years old, have ongoing monitoring of their phenylalanine levels, a service provided by the Biochemical Genetics Laboratory at Southmead Hospital.

As a lead up to this event, one family were interviewed for the Bristol Evening Post and ITV West. Together with an interview with Dr Helena Kemp, who heads the Region’s Neonatal Screening Service, this formed a really positive and informative news article that was broadcast on the regional evening news on 4 November. It highlighted the critical role of the screening programme and ongoing monitoring and care of metabolic disease, and was a great advertisement for National Pathology Week.