Pathology goes into the city in Norwich 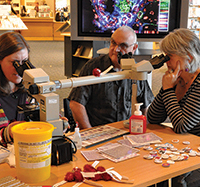 During a very successful two-day event, students and members of the public had a chance to hear lectures on childbirth, screening, genetics and the role of different pathology disciplines, including guest talks from obstetrics and paediatric surgery. This time we had a hands-on exhibition and there was also a poetry and art competition. Our website, www.norwichpathology.org, supported the events for the third year. On Saturday the Millenium Library hosted us and many interested people came to see the major pathology disciplines close-up, try microscopy, haematology and microbiology skills. This event was well received and was probably helped by our morning BBC radio interview.

National Pathology Week joined forces with Café MED at the Suttie Centre, Aberdeen, for an interactive evening chaired by Dr Kevin Deans (Consultant Chemical Pathologist) exploring the world of pathology. “Finding the Culprit” featured short talks by Professor Hamish McKenzie (Consultant Microbiologist) on how pathology can assist in cases of infection by the so-called “Superbugs.” Dr James Grieve (Senior Lecturer in Forensic Medicine) then gave an insight into the world of forensic pathology. A lively discussion followed, and feedback was very positive, with one participant describing the evening as, “very illuminating and fascinating.” 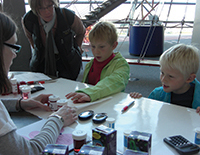 Following the successful format of the event for NPW 2008, Greater Glasgow & Clyde Clinical Biochemists, lead by Drs Jane McNeilly and Kevin Deans, Royal Hospital for Sick Children, Glagow, took the lab to the public at Glasgow Science Centre, providing ‘hands on’ activities including measuring the glucose concentration in normal and sugar-free drinks and point-of-care cholesterol testing.

Over 130 children became ‘mini scientists’ for the day, enjoying the opportunity to do ‘a real experiment’. Parents, children and scientists alike were shocked by the sugar concentration in a single carton of normal juice. Cholesterol testing was extremely popular amongst the adults, with the opportunity to discuss results with medically trained physicians and clinical scientists hopefully alleviating any unnecessary concern. By the number of correct entries in the ‘Cardiovascular Risk Quiz’, the information booklets and posters explaining the important cardiovascular risk factors were clearly understood. 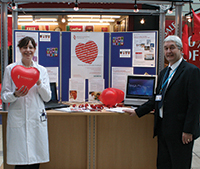 Members of the public in Ashford had the opportunity to learn about pathology, in particular relating to cardiology and cardiovascular medicine. Dr Michael Dawson, Specialist Biomedical Scientist (Microbiology) and colleagues from the East Kent Hospital University NHS Foundation Trust were on hand to answer any questions from those visiting the stand. There was great interest from the public in the work that pathologists do in the diagnosis and management of disease. 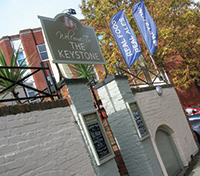 Café Scientifique events are held in a range of venues, such as bars and cafés, and give the opportunity for those interested in science to discuss interesting scientific issues.

In association with National Pathology Week, the Keystone pub in Guildford was the venue for an evening of discussion and deliberation on the subject of screening for disease, with over forty attendees. Following an enlightening talk from Mr Stephen Halloran MBE, as well as a tipple of choice, areas enthusiastically debated included funding, how to decide upon who should be screened, and ways of improving participation in current screening programmes. 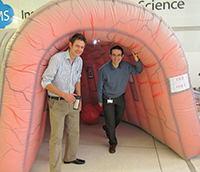 Michael Eden, Histopathology Registrar at Addenbrooke’s Hospital, with a team of over 13 colleagues, organised a number of events in Cambridge during NPW. Over 100 members of the public took part in a tour, including a walk through an inflatable colon. This was supported by information on pathology disciplines and a promotional stand in the Grand Arcade Shopping Centre.

At a school outreach programme in Newmarket, students had the chance to speak to pathologists, test their knowledge and try some simple allergy tests. Michael was interviewed by our local newspaper Cambridge First, who also interviewed a Crohn’s patient who had benefited from pathology services. The events were successful and feedback was extremely positive. 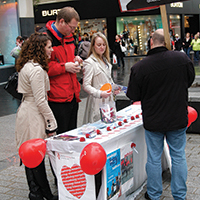 Braving the rain in Liverpool and Manchester

Jennifer Glaysher and other biochemistry staff from the University Hospital Aintree braved the rain in Liverpool and Manchester to raise awareness of the role of pathology in hospital medicine and where patients’ blood samples go. They highlighted the website Lab Tests Online. The public seemed surprised by the lab’s high involvement in their care and the level of interaction pathologists have with patients. Everyone was interested in hearing about how their samples are handled and as a result many will be using Lab Tests Online in future.