What happens to your pee, poo, pus, placenta and plasma? 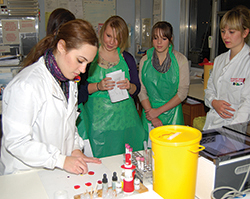 Histopathology showed a uterus, twin placenta (the students were surprised at their size!), testis and kidney. Students mounted tissue ribbons on glass slides and saw pictures of normal lungs and those of a smoker. In biochemistry, they performed pregnancy tests on ‘urine’ samples and followed an interactive poster on the complications of pregnancy.

In haematology, students confirmed blood groups of dummy patients, learned about Rh status and HDN, were shown the morphological features of IDA and watched a DVD of semen analysis. Microbiology presented the ante-natal care provided for a high-risk pregnant woman, looked at neonatal gram stains down a microscope and associated C&S, and demonstrated the students’ inefficient hand-washing technique. Students commented: “I didn’t have any idea about the different machinery and technology that existed in pathology!”, “it’s not all about autopsies, like on TV” and “pregnancy is scary with all the potential complications” 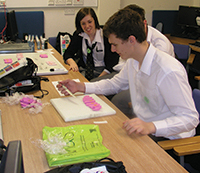 Dr Esther Youd, Cwm Taf Health Board, Llantrisant, held two events for sixth form science students. The first was a lab tour with help from the four main pathology disciplines. The highlight was “looking at my own cheek cells” – they swabbed their cheeks and made a slide which they stained and examined using a microscope. The second event was a virtual autopsy where students got hands on with autopsy instruments and the pathology clinical director was “eviscerated”! Feedback from both events was excellent from students and teachers.

Funmi Akinlade and Stuart Jones, Clinical Scientists at Barking, Havering and Redbridge University Hospitals NHS Trust, arranged ‘Introduction to Pathology’ workshops for local A-level biology students. With a group of 11 colleagues from all pathology disciplines, a total of 29 students and two teachers were given an insight into the role that pathology plays in the diagnosis of disease. Topics covered included Down’s screening, POCT, a practical session using faecal occult blood tests, laboratory tours and viewing tissue samples using the multi-headed microscope. One of the teachers said “the day was fantastic, really inspiring for the pupils and the staff alike!”

‘The other end of the needle’ 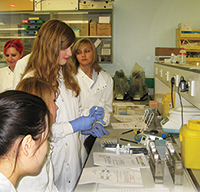 The pathology department at King’s Mill Hospital, Mansfield opened its doors to 50 sixth form science students. The students were given an introduction to the world at ‘the other end of the needle’, before being shown all five disciplines based at the hospital. The feedback showed that it had been a very informative visit for them all. The tutors appreciated how subjects taught in the classroom were ‘brought to life.’ We even have a work experience placement as a result! The event was organised by Sue Blunden FIBMS, with help from colleagues.

Pin the organ on the teacher 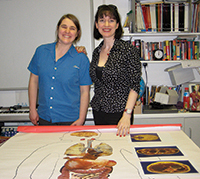 The paediatric ward classroom at St Mary’s Hospital, Paddington, was the venue for a National Pathology Week event during NPW 2010. In her second hospital school event of the week, Dr Suzy Lishman joined teacher Melissa Hind to engage young in-patients with pathology, armed with only a long roll of paper and some cut-out organs. The pupils, most of whom had sickle cell disease or thalassaemia, drew round their teacher and had fun identifying major body organs and sticking them on the outline. This event is easy to recreate and can be pitched at all levels – a downloadable resource is available here.

Taking pathology back to school 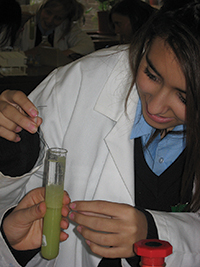 This event introduced the art of detection into pathology. GCSE-level scientists were introduced to the fundaments of DNA extraction techniques (using kiwi fruit) and microscopic examination (using liver slides) as a tool kit to solve various problems. The Wales Cancer Bank took a pathology roadshow to the year 11 students of Howell’s School in Cardiff to demystify pathology and encourage them to consider science, medicine and especially pathology as future career options.

The students had the opportunity to talk to a pathologist, Dr Meleri Morgan from Llandough Hospital, hear about the role of the biomedical scientist and discover from Professor Geraldine Thomas, Imperial College, a little of what molecular pathology research was doing to help inform treatment pathways in breast cancer. “The students have been inspired! They thought the sessions were fun and it was nice to have some ‘real’ scientists in just at a time when they’re choosing their A-level options.”